So this past Saturday I helped host the 4th Annual Heart Show.  As you may know, the Heart Show is the main fundraiser for the James Anthony Ray Sadler Scholarship.  Once fully funded, this endowment will provide  a full ride scholarship to a Hillsborough High School graduate to cosmetology school.  This event has been a great success for the past 4 years, with some highs and lows.  After the first 2 successful years, the staff of the salon was tired and weary so I kept the event to a minimum of work for the staff and the third show was dismal in both production and in ticket sales last year.  I vowed that this year the Heart Show would return to it’s former glory.  We were successful in creating an amazing stage show that wowed the audience and provided value for every dollar spent at the door!

First of all; much thanks must go to Kelly Alexander, Tribeca’s Culture Leader.  It is a part of her job in this role to manage all of our outreach work for the scholarship.  She put her heart and soul into her work and it really came together for a smooth running show.  Kudos to you Kelly, it was a great party!  Thanks to the staff of Tribeca as always; we with over 50 models with full hair and makeup.  It was a long day.  Thanks to Lonz for cooking up a great ziti! 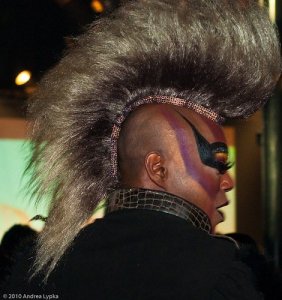 Plans for the show began several months ago, as we recruited talent for the show.  Raven and Blackbird are 2 local designers who put together amazing stage performances.  They were recruited immediately after we witnessed their fashion kills show at Czar  earlier this year.  Paul Raymond created a great fashion vignette for us, even though he couldn’t be present  due to a family wedding.  Local boutiques La France, Renown, and Revolve Clothing Exchange supplied fashions styled by Darryl, a local fashion stylist who recently returned from a successful stint in NYC.  Arica Love, emceed the show and performed the final act of the show and truly was a fantastic hostess.

The night began with the student hair competition.  Many entries from Aveda flooded the stage, and out of the 30 entries Aveda School produced some great work.  Congrats to everyone that entered, because you took the risk and put yourself out there to be exposed, which is always the key to success.  Everyone did great, but the it was Hope Starling who took home the grand prize, which included tickets to the Premiere Beauty show in June.  Congrats!  Our celebrity judges, including Ben Chmera from Project Runway and Gen from the Genitorturers really picked the best whole looks!

The salon expo featured UBU salon, Mikels and Tribeca ColorSalon celebrating the art of hair, and really showed strength through diversity in offering such a diverse vision of show hair.

There are way too many people to thank, including the audience members that cheered us on all night.  So thanks to anyone reading this blog!  It was so exciting to see so many people having a great time.  We’ll see you next year, since this show was so exciting we’ll be planning an even bigger and better show next year!

Are you new to Tampa? Please use our Stylist Matchmaker on the home page to find the perfect stylist for you!